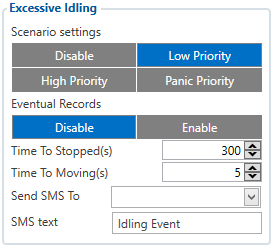 An event will be generated when FMC800 is unplugged from OBD socket or plugged back in again.

Towing Detection feature helps to inform the driver about unexpected car movement when it was parked. FMC800 generates an event when car is being towed or lifted, for example, in a case of vehicle evacuation. FMC800 activates towing function when following conditions are met:

When towing function is engaged FMC800 monitors accelerometer data. If acceleration Threshold or Angle reach configured values for a configured Duration, and Ignition is still OFF for a period of time that is longer than Event Timeout, then an event is generated. When configured, Make Call To and Send SMS To functions make a call or send an SMS to a predefined phone number. Towing function will be reactivated after FMC800 detects a change of Ignition state from ON to OFF. 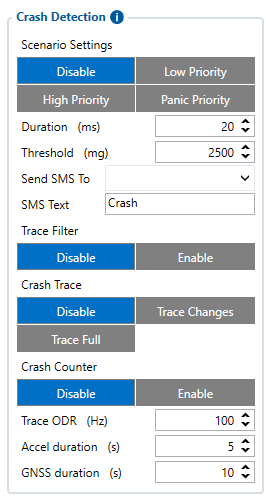 If Crash Detection is enabled, it monitors acceleration on each axis which helps to detect an accident. Threshold and Duration values are set depending on the impact magnitude that is required to be detected. FMC800 can detect events ranging between a slight tapping on the device and a severe accident.
If Crash Trace is disabled only one eventual crash record will be generated when Duration (ms) and Threshold (mg) values are exceeded.


If Crash Trace is enabled, FMC800 will collect crash trace data with frequency defined by Trace ODR (Hz) parameter. Acceleration, GNSS and IO data monitoring duration during the crash event is defined by these parameters: