RS-232 supports only full-duplex communication, which means the data can be sent and also received at the same time.
Note: In RS-232 LLS mode can be connected only one LLS fuel level sensor.

RS-485 supports only half-duplex communication, which means data is transferred only one way at a time.
Note No. 1: In RS-485 LLS mode can be connected up to 5 LLS fuel level sensors.
Note No. 2: when activated RS-485 driver chip draws a constant 30 mA current when entering Sleep or Deep sleep RS-485 will be powered off.

In this mode via RS-232 or RS-485 interface prints the FMB640 device log and does not respond to commands.

In NMEA mode via RS-232 or RS-485 interface FMB640 prints GNSS NMEA log and does not respond to commands.

In LLS mode RS-232 supports one and RS-485 supports up to five LLS sensors - each of which has a receiver ID.

In TCP Ascii/Binary mode all data received from the external device is sent directly to the server. Data is encapsulated in Codec 12 format. TCP Binary Mode has a delay of 30 ms, if no data is received for 30 ms, data is sent to the server. TCP Ascii mode waits for the End of Line (EOL) character (0x0D0A, \r\n, <CR><LF>) to pack data and send it to the server.

TCP Ascii Buffered and TCP Binary Buffered modes are used to collect data from RS232 and save it in the buffer if there is no link with the server and data cannot be sent immediately. When the link is established and there is data to transmit, then RS232 data from the buffer is transmitted after all records are sent.

*If the Timestamp parameter is enabled, then Codec 13 is used for data sending. Otherwise, Codec 12 is used.

Message Timestamp parameter is used to determine if it is necessary to include a timestamp in the RS-232 TCP packet when sending to the server. If the parameter is Enabled, then Codec 13 is used for data sending. Otherwise, Codec 12 is used.

This parameter is used when FMB640 is sending RS232/RS485 packet to a server, it overrides command type value in Codec12/Codec13 with user-defined CMD ID value (1 - 14). FMB640 behavior when it receives different CMD ID (Type) values in GPRS packet from server.

Below you will find descriptions of available modes only for RS-232 interface:

In this mode, the user is able to communicate with the server through the terminal. A link between the FMB device and the server has to be established for this mode to function properly.

Radio-frequency identification (RFID) is the use of a wireless non-contact system that uses radio-frequency electromagnetic fields to transfer data from a tag attached to an object, for the purposes of automatic identification and tracking. FMB640 can be configured in a way to use with an RFID reader. When an RFID of some sort (typically a plastic card with a magnetic line) is used with an RFID reader that is connected to FMB640, the device creates a record with the data that the RFID reader has read and can be sent to a server with all other information. RFID ID is activated like an I/O parameter:

To set up FMB640 so it can be connected to an RFID reader, some parameters have to be set up. Go to RS232 \ RS485 and set up COM1 or COM2 settings to RFID Mode or RFID MF7 Mode (the used mode depends on the mode that the RFID reader works). See Figure 922. The Baudrates for each mode are: 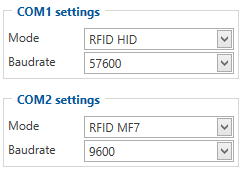 The difference between RFID HID Mode and RFID MF7 Mode is that in RFID MF7 Mode FMB640 understands RFID messages that are in hexadecimal text format and RFID HID Mode interprets messages that are in binary format. The type of RFID message sent to FMB640 depends on the RFID reader. For example, the RFID MF7 mode message looks like $aa$02$03$04$17$89$00$01 while the HID mode message is of the following format: "1213141519". The selected mode has to correspond to the RFID reader's mode. Please contact your local sales representative for more information about RFID IDs and devices.

In this mode, records are sent via ports. This is an example view that is displayed in Terminal: 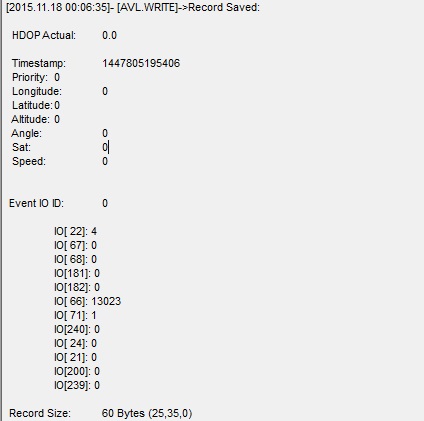 This mode is used to connect the ATOL tachograph.

Select this mode to make Ultrasonic Fuel Sensors work on the COM port.

Garmin provides a Fleet Management Interface Tool Kit, once FMB640 is connected to the navigator it enables the driver to have a "screen" in their vehicle for real-time navigation and messaging and offers job dispatch capabilities to help them be more efficient.
FMB640 and Garmin operational diagram is shown in the figure below:

Garmin configuration is shown in the figure below: 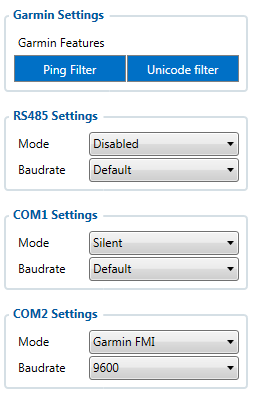 LLS sensor series liquid level sensors are solid-state capacitive devices with no moving parts. The sensors use capacitive technology to produce accurate liquid level measurements of standard factory-grade DIESEL OIL and PURE GASOLINE (BENZINE) carbon fuels. The LLS sensor liquid level sensors are strictly prohibited to use in any liquids which are not factory-grade carbon fuels or contain: BIOFUEL, METHANOL, ETHANOL, UREA, and similar aggressive components in pure form or as additives for factory-grade carbon fuels for use in INTERNAL COMBUSTION ENGINES. Operating media – Diesel fuel (oil), pure gasoline (benzene).
In order to use the LLS fuel counter, the newest firmware version is needed which can be obtained from Teltonika or a representative. Firmware is updated over GPRS or using a cable update method.

First of all, the LLS fuel sensor must be connected to the FMB640 device. Please find examples below:

Then FMB640 must be configured. Both fuel level and fuel temperature has to be set up by the configurator’s I/O menu:

The following is a list of protocols supported and the corresponding list of features/benefits. FMB640 can fully support Fleet Management Interface (FMI) versions up to 2.1. Other or higher versions may be supported, but Teltonika is not responsible for the changes made by Garmin, which may affect the function of FMB640 and Garmin products. For more information about Garmin products and FMI versions, please refer to https://www.garmin.com/en-US/fleet-ready-navigators/. Notice that some Garmin products use different connection cables than others.

TAVL client application lets the user use the following features of Garmin FMI:

The text messaging feature lets users communicate with the driver (the user that operates the Garmin device) by sending text messages via GPRS.

Estimated Time of Arrival request message is used when the user wants to know an expected arrival time to the currently active destination and the distance (in meters) from the current object location to the destination.